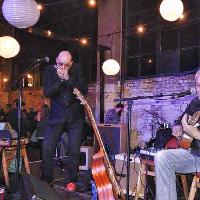 
Chris James, guitar and vocal and Martin Fletcher, amplified harmonica and vocal, first met when booked to play at the same venue. They liked each others music and gradually started working together, notably reaching the Final of the New Brunswick Battle of the Blues in 2013. They have 2 independently made EP’s of mostly their own songs. In 2014, they wrote and performed the music for a BBC Radio 4 documentary. They also perform as a trio with percussion or quartet with Bass as well.
Chris, from Carlisle, has played music for the last 30 years as a solo acoustic guitarist, playing slide and fingerpicking blues and original songs. He has played at many of the major national Blues Festivals such as Burnley, Colne, Dundee, Carlisle, Maryport and Durham Festivals. Along the way he has also opened for many of the major Blues performers around such as John Mayall, Dr. Feelgood, Earl Thomas and Nine Below Zero. Chris has won through to the Final of the New Brunswick Battle of the Blues 2 years running in 2011 at the
100 Club in London and in 2012 at The Garage Highbury as a solo performer, aswell as reaching the Final in 2013 in a duo with Martin Fletcher. Chris was nominated in the Acoustic category of the British Blues Awards 2012.

Martin, from Newcastle and Tyneside, started playing blues harmonica in 1971. Approval from Chicago legend Big John Wrencher helped to keep him motivated at a time when blues players and bands seemed to be disappearing. After a few fallow years of home practice while working and having a family, Martin joined The Blues Burglars, taking the harmonica chair previously filled by Paul Lamb, and began gigging regularly. He also worked with Hokum Hotshot Jim Murray in an amplified street-corner blues duo for several years in the 1990s. Martin Fletcher's Usual Suspects was a very popular Tyneside, Texas/California-style blues band in the late '90s, but shocked their audience by adding a DJ, MC and contemporary R'n B singer in 1999, and fusing blues with hip hop...well before it became commonplace.
Martin has played numerous festivals in the UK and Europe, particularly Peer Blues in Belgium...having the honor to lead the first band ever to have a DJ onstage at Peer.